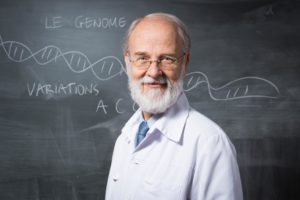 Stylianos E. Antonarakis is Professor and Chairman of the Department of Genetic Medicine and Development at the Medical School at the University of Geneva, and co-founder of the iGE3 Institute of Genetics and Genomics (Geneva). In addition, he is the President Emeritus of the Human Genome Organization since 2013, chair of the Genetics panel of the European Research Council and member of the scientific council of the Swiss National Science Foundation (SNSF). He was also the President of the European Society of Human Genetics for the period 2001-2002.

His research focuses on the relationship between genomic and phenotypic variations, and in particular on:

He has published more than 660 scientific papers, and he is listed as one of the highly cited scientists by the Institute of Scientific Information (h-index 94). He is co-editor of the current edition of the classic textbook Genetics in Medicine and reviewer at journals, such as Annual Review of Genetics, Genetics and Genome Research and eLife.

He has obtained numerous scientific awards, and in 2017, he was named honorary member of the Swiss Academy of Medical Sciences. He is the originator of the World Down Syndrome Day, celebrated each year on March, 21.

Listen to the farewell lecture of Dr Antonarakis on November 2, 2017 at the University of Geneva.